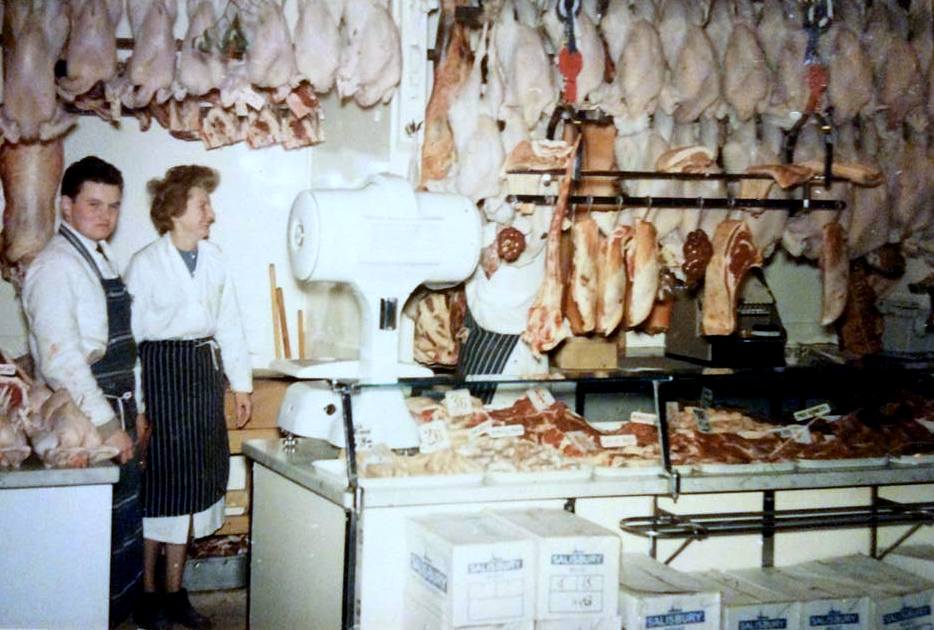 This photo was my first Christmas after my father passed away earlier that year, what memories, although I had been working in the shop for 4 years buying stock for Christmas was a completely different aspect from the normal weekly sales. I had some of Dads old contacts, and had placed my order for most of the Poultry especially the Turkeys , so going from previous records that I could find , Dad didn’t write much down , but he had a very good memory , I ordered 100 Turkeys, 50 Capons, 6 Geese and 12 Ducks, as I didn’t have a game licence, so no Pheasant, Venison etc. With regards to the Pork, leg of Pork was very popular, not like today I’m afraid and I don’t really know why? Perhaps the famous Chefs on the telly don’t promote it enough order to get enough legs of Pork for the festive season, around the middle of October we saved some each week, scored them covered up well, and put them in the old Tea Chests and took them to the local Freezer Rooms , we usually stored around 60, always off our own pigs to get the right size, not off the larger Cutter pigs. Lots of people wanted the centre cut, my mother in law included!

So you had to ensure you sold the Knuckle ends first or put the centre cuts back in the chiller for customers who had previously ordered them, Traditional Sausage meat was made but not in the plastic sleeves, just put on a large tray and cut it off. All the Poultry had to be prepared in the shop, and all the Sinews were pulled out , god help you if you snapped any off, you were not very popular with the head butcher who trussed the birds up using long wooden Skewers , putting them through the wings, and tying up the rear . When gutting them you had to make sure you didn’t break his bum hole as this was used to put over the Parsons nose to close the body cavity, and you had to ensure you removed the lungs or no brownie points there. When you had to get the Sinews out of the big Stag birds , the foot was placed in a claw hook and it was pull and twist till they all came out, at the end of the day your chest and arms really ached, lotsof warm water to keep your hands warm and clean, and a nice piece of Muslin to dry out the Cavity. If you had one that was just coming out of moult you had to get a pair of Pliers to pull especially the wing feathers out. Going back to the Pork it was all sold on the bone, even the Shoulder , the blade bone was left in, in my opinion, that’s why all meat tasted better on the bone, not very convenient for the Electric Carving Knives I suppose, but then they didn’t exist then. Very little Lamb sold , it wasn’t in fashion in those days , mainly the Poultry , Pork, Beef, and some Gammon which also was sold on the bone except perhaps the Slipper,(that’s the muscle of the leg usually with the Knee cap attached ) there was no such thing as Horseshoe Gammons in those days , just whole legs, I feel I’ve probably written enough for now as Kim has remarked I should write a book on my exploits of being a butcher for 57 years

When I very first started full time at Dads stall, he employed three full-time butchers and me of course, my turn always to scrub the large block in the Summer, it was so hot, but not so much in the winter as it helped the butchers to keep warm. The secret of getting the wooden block nice and clean and white was, first of all, get some very hot water, just to get the surface wet, not sloshing it around, dry it off and get some Sawdust and rub it into the surface to absorb the grease and any staining. Get your wire brush and with a sweeping motion pressing down hard on the brush, you soon got a sweat on, you continued this until you reached the other end, this block was 9 ft by 3ft so plenty to clean. This should show nice and white and dry, you then you did the rails around the block, got reprimanded if you chopped or caught your handsaw on this part as it was softwood. This part acts like a clamp holding all the individual blocks usually maple together, next time you look at a traditional block you may notice small wooden discs on the side and the ends, behind them, are iron Bars with nuts on the end that go from end to end and sideways as well. Due to the length of this particular block, there were two bars running lengthways and three bars sideways. Every now and again as the surface wore you turned the block completely over if it was too badly worn in several places you would get it to the local Sawmills for them to skim it off as best they could.

Meat Consumption was quite large in those days, no McDonalds, no Pizzas, no ready meals, just good old fashioned fish and chips, Ona Monday morning our delivery was 10 forequarters of beef, 6 Hindquarters of Argentine Chilled Beef, it was the best in those days, lovely Angus / Hereford Beef, shipped in the holds hanging for six weeks from the River Plate, some of it through the Vesty Group as they had plants there and there own Shipping line, 20 NZ lambs to start the week, had 20 more on Wednesday. The Lambs were hung up to soften up a little and were all chopped up with a cleaver, which is a long-handled version of a chopper and a much heavier blade. The butcher was so strong he would really swing it right from the top, no electric bandsaws in those days. 6 pigs on a Tuesday only porkers, if they were much over 100 lbs dad, would send them back too big he would say, such a difference to the weights nowadays,I always tried to get Gilts around 55 to 60 kilos, all the Pork was sold on the bone even with the shoulder blade in , and the hand was sold with the hough on ,took the small foot off though , they were popular at times when people made there own pork pies to boil and get the Gelatine out of them to pour into the tiny hole they made in the top of the pie to fill it out . There was a cut called the hand and Spring which was the shoulder with some belly attached, also a blade of Pork which is the blade out of the shoulder taken out from underneath leaving the meat and the crackling on the top. This leaves you with Sparerib Chops, they are delicious roasted with some stuffing and such a lovely sweet taste, as the saying says , nearer the head sweeter the meat, lots of the beef was sold on the bone and the forequarter cuts were very popular , Brisket and the flank end on the bone delicious, the eye of the Chuck was skewered up with the metal skewers, not much string used in those days, some weeks we sold more steel than the Steel Company of Wales! The blackstrap was removed from the Chuck, sold these days as your dog Chews ,it is these that have been Roasted, when raw a slap with one of those and by golly you felt it, the Jacobs Ladder was put in a casserole, nowadays people put them on there BBQ it is the end off the top of the ribs of beef , then there is the leg of mutton cut ,so named as it’s in the shape of the leg, originally it was called also the Bread and butter cut, because there was a layer of fat in between the bone on the inside and the muscle on the top, this cut is in the lower shoulder opposite to the Chuck . Always remember all lean meat Is muscle, hence the legs(shin)or the neck carrying a large head has to be very strong. The Fillet Steak is inside the animal or tenderloin in a pig is always tender as there’s not much strain on there.instead of having to say 2 kilo of Chuck Steak in slices they would have it in a piece often on the bone and put it in the oven and slow roasted with perhaps a few whole onions, the gravy from this was to die for ,so tasty just like the Brisket only the Brisket was more flakey. Have you ever tried a bit of skirt!! It’s beef don’t sweat it’s not porno. Cornish people will know as they say it’s best for Cornish Pasties, especially what is known as the goose skirt, this is a muscle found inside the hind legs of the animal usually triangular in shape , the heart skirt or feather skirt this is to be found next to the heart and when sliced lengthwise looks like a feather , the other one also inside the body cavity is called the body skirt ,it is just below the ribs on a pig , skirting is the general term and it shreds apart ,just pulls apart it is quite lean. One more tip for tonight if you like liver at all, if you wish to get rid of the strong flavour leave the liver soaking in milk overnight, butchers used to put Ox liver in overnight and said it tasted like Calves liver.