The Oxford Sandy and Black breed standard is key when selecting Oxford Sandy and Black pigs to register for breeding it is vital that the underlines are correct -, particularly with boars. Selection should go by underline (14 evenly spaced teats for boars with six of these in front of the sheath). Gilts can have 12 evenly spaced teats but we should be aiming for 14. The shape and overall conformation are also very important followed lastly by markings. It is no good picking a pig to register because it is pretty – they must be correct.

Click on each pulsing pointer to find out more about the required breed standard for the Oxford Sandy and Black Pig, and see good examples of each.

The colour of the Oxford Sandy and Black Pig is a personal preference, some like the dark rust colour others like the lighter colour but the colour should be even throughout what is important is the confirmation of the pig. Black patches NOT spots (or splotches we use on this group), the underline (teats) are VERY important. The teats must be so when the gilt/sow lies down the teats are at five to one (clock face) meaning that when she lies down the teats on the bottom are also pointing outwards, therefore, enabling piglets to suckle easily from the bottom as well as the top. Oxford Sandy and Black Pigs should also have white socks (although having a black leg has been seen to be acceptable) and their legs must be straight and not knocked knee. The ears are to be lop or semi loped NOT pricked, their backs are not to be straight nor have a dip but have a nice curve to the back end. A white blaze (white stripe between the eyes) and white tip to the tail is a bonus and will get you extra points at shows. The face is not to be too long in the nose nor should the face be too dished (squashed looking).

BOARS: testicles should be highly placed feel nice and firm with no lumps or not spongy to the touch. They should have four evenly placed teats before the shaft. A few white hairs are allowed. You can also have TOO MUCH BLACK.

I have shown a picture of Georgina when she was four weeks old and then at two. Georgina has 14 teats, white socks, I would most probably lose points on her ears as they may be deemed too long. Then a picture of a VERY light boar with pricked ears which is good for the freezer. The next picture shows SPOTS not really patches which are then followed by a pig showing uneven baseline,

swirl/rosette of hairs, too many white hairs, and pig showing he has it all with being too light with a dip and long nose.

The last picture shows a nice even, parallel underline. There are 14 teats, I promise, it is just stuck in the ground as she rolled. 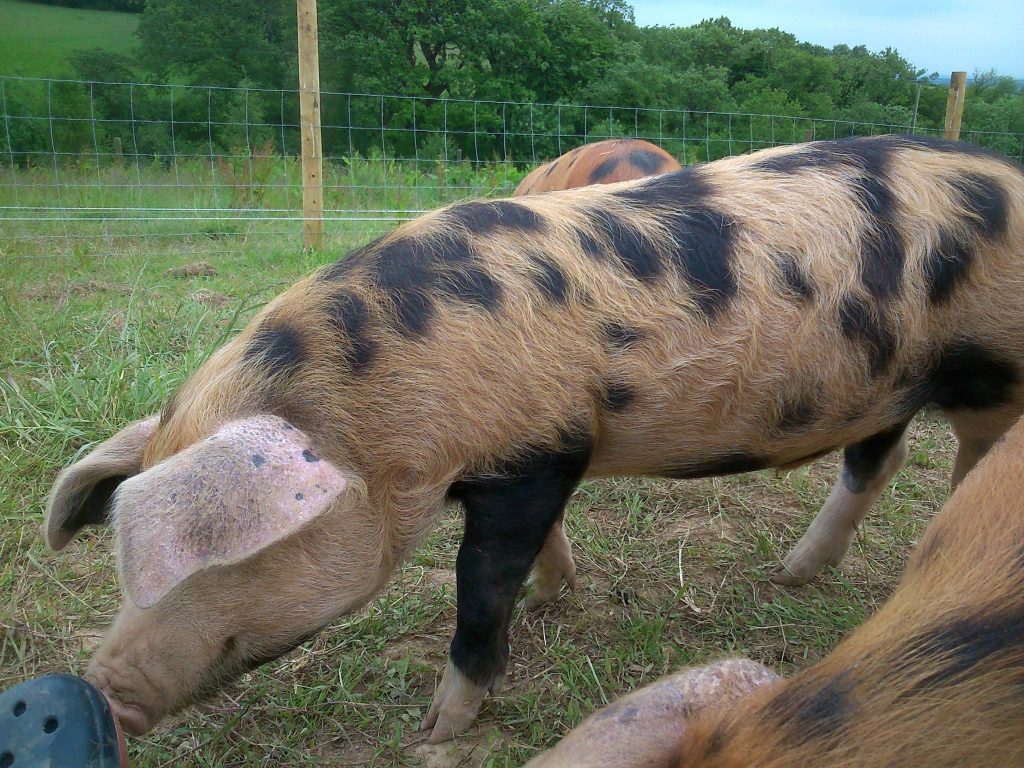 Poor love. Has it all, too light, uneven baseline, dip in back, snout too long and has swirl.