As we know the sow’s reproductive system is paramount for a fruitful mating program, whether it be AI or natural service (NS).

The primary structures of the female reproductive tract are the ovaries, they have two major functions:

1. Produce ova, the female germ cells and
2. Produce the hormones progesterone and estrogen.

Each ovary is surrounded by a thin membrane called the infundibulum, which acts as a funnel to collect ova and divert them to the oviduct. The oviduct is about 6-10 inches long and acts as the site of fertilization. 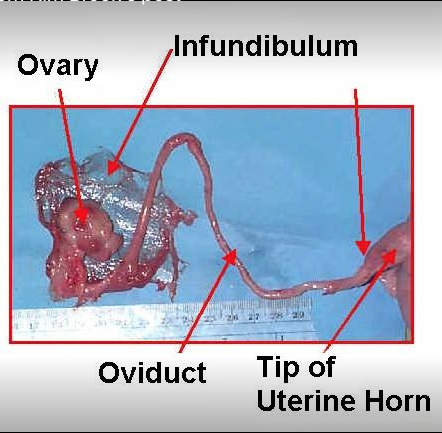 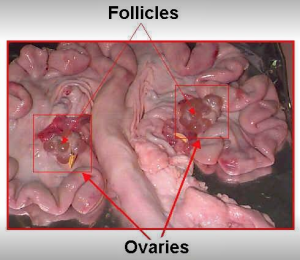 There are two uterine horns. Each is 2-3 feet in length in the non-pregnant sow. They act as a passageway for sperm to reach the oviduct and are the site of fetal development. The uterine body, which is small compared to some other species, is located at the junction of the two uterine horns.

The cervix is a muscular junction between the vagina and uteri. It is the site of semen deposition during natural mating and AI. It is dilated during heat (estrus) but constricted during the remainder of the estrous cycle and during pregnancy.
The vagina extends from the cervix to the vulva and serves as a passageway for urine and the piglets at birth. The bladder is connected to the vagina by the urethra.

The vulva is the external portion of the reproductive tract. It often becomes red and swollen just prior to estrus and this swollen condition is usually more pronounced in gilts than in sows.

The hypothalamus located at the base of the brain secretes gonadotropin releasing hormone (GnRH) which regulates the anterior pituitary gland to secret FSH (Follicle Stimulating Hormone) and LH (Luteinizing Hormone) into the blood which stimulates the production of the ovarian hormones, estrogen and progesterone, which in turn regulate the reproductive process. Oxytocin is released from the posterior pituitary gland. 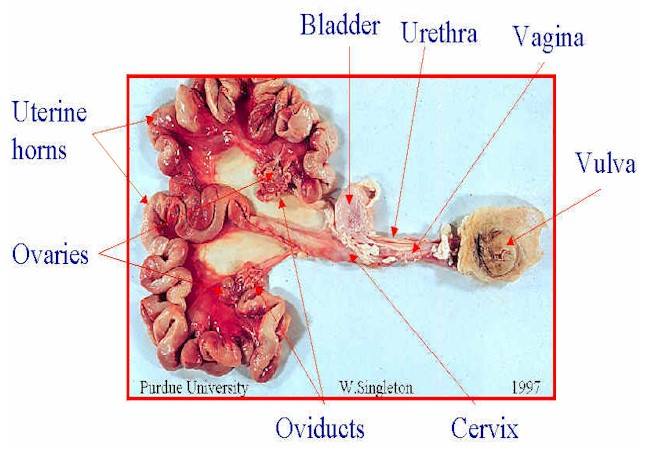 As we know the sow’s reproductive system is paramount for a fruitful mating program, whether it be AI or natural service (NS).
Oestrus Cycle, Oestrus and Ovulation
Non-pregnant and non-lactating sows and gilts display oestrus or standing heat on a regular basis throughout the year. The estrous cycle is normally 21 days and is defined as the time between the onset of one oestrus to the onset of the next. The cycle length can range from 18-24 days.
Lactation or the nursing stimulus inhibits the oestrus cycle and sows will not, as a rule, return to heat until the litter is weaned or a few days from weaning until oestrus is influenced by such factors as length of lactation, size of litter, season and nutritional level, but should range from 3 to 6 days.
As oestrus or heat approaches, 6-10 follicles or “blister like” structures form on each ovary. Follicular growth accelerates about 3 days before oestrus and is influenced by FSH or follicle stimulating hormone released from the pituitary gland, located at the base of the brain. A maturing ovum is held within each follicle. Granulosa cells within the follicle secrete estrogen, a hormone, which among other things is responsible for the typical signs of oestrus. Ovulation, or release of the ova, is stimulated by LH (Luteinizing Hormone). Ovulation occurs about 40 hours after the onset of oestrus, but this interval is variable.