Nine years ago my youngest had her 21st and as she was inviting around 300 people to her party she suggested having a Hog Roast with one our own fatteners to feed the masses. We sourced a spit roaster machine and the day was magic with the pork going down a treat. A few of Georgia’s (my youngest) friends asked could we do their 21st and a new business was born. We sat down with an engineer and designed a Spit Roaster with a few tweaks and a few practices on family and friends we were up and running. We got our Environmental Health Officer on board from the start and completed our food courses etc. 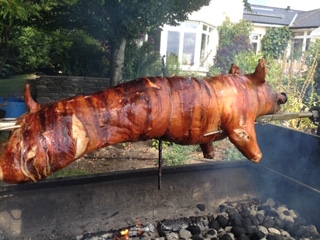 One of our first Hog Roasts.

We made mistakes and learnt from them and have grown every year since. We have catered for a Stag party for 14 lads canoeing down a river with our Hog Roast waiting for them, to feeding 3000 people at a Dept of Agriculture Open Day. My family are on board now and we do the whole event with bread, sauces, knives, forks, plates, napkins and salads made fresh on the day.

Six years ago we sourced Oxford Sandy and Black gilts and a boar from Maureen and Andy Case after spending time with them on their farm in Wiltshire. My aim was to get the 13 female bloodlines and 4 male bloodlines and as of writing this, we have purchased the final remaining bloodline, an Alison due in Ireland soon. 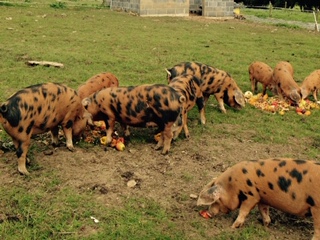 Six years ago I attended a meeting of a group of 6 people interested in pigs with a view to setting up an all Ireland group interested in all aspects of pigs and The Irish Pig Society was born. We formed a committee and attended shows promoting pigs, held Open Days, working closely with the Irish Department of Agriculture concerning people obtaining herd numbers and making people aware of the approaching threat of ASF.  We have a tent at the All Ireland Ploughing Championships where 300000 people attend and the pig tent is full from 7am till nightfall answering the public’s questions. 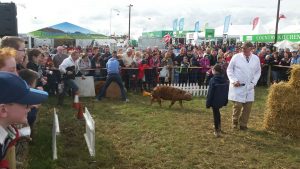 We have started showing our pigs at the All Ireland Agriculture Show in Tullamore with the likes of Brian Merry and Tom Alty coming over to judge and I have been lucky enough to win two of the last three years with a Dandy Gilt and a young Alexander Boar. 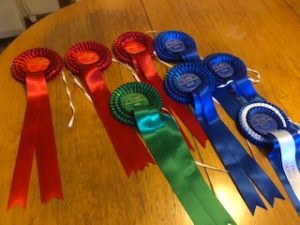 With Brexit and ASF in the near future, the Society has a lot of work ahead of us and I’m halfway through a three-year term of being Chairman of the Society.
As of March 2018 I am now full time at pigs, breeding, cooking, TV work and it is the Chinese Year of the Pig and only yesterday we attended a photo shoot and had a photo with one of our OSB and the Chinese Ambassador to Ireland on the front of most of today’s national newspapers.  I feel the future for both all aspects of pigs and Oxford Sandy and Black pedigrees is bright but it’s on ongoing labour of love and when you wake every morning and jump out of bed knowing the Oxfords are waiting for you, you know you have the best job in the world……