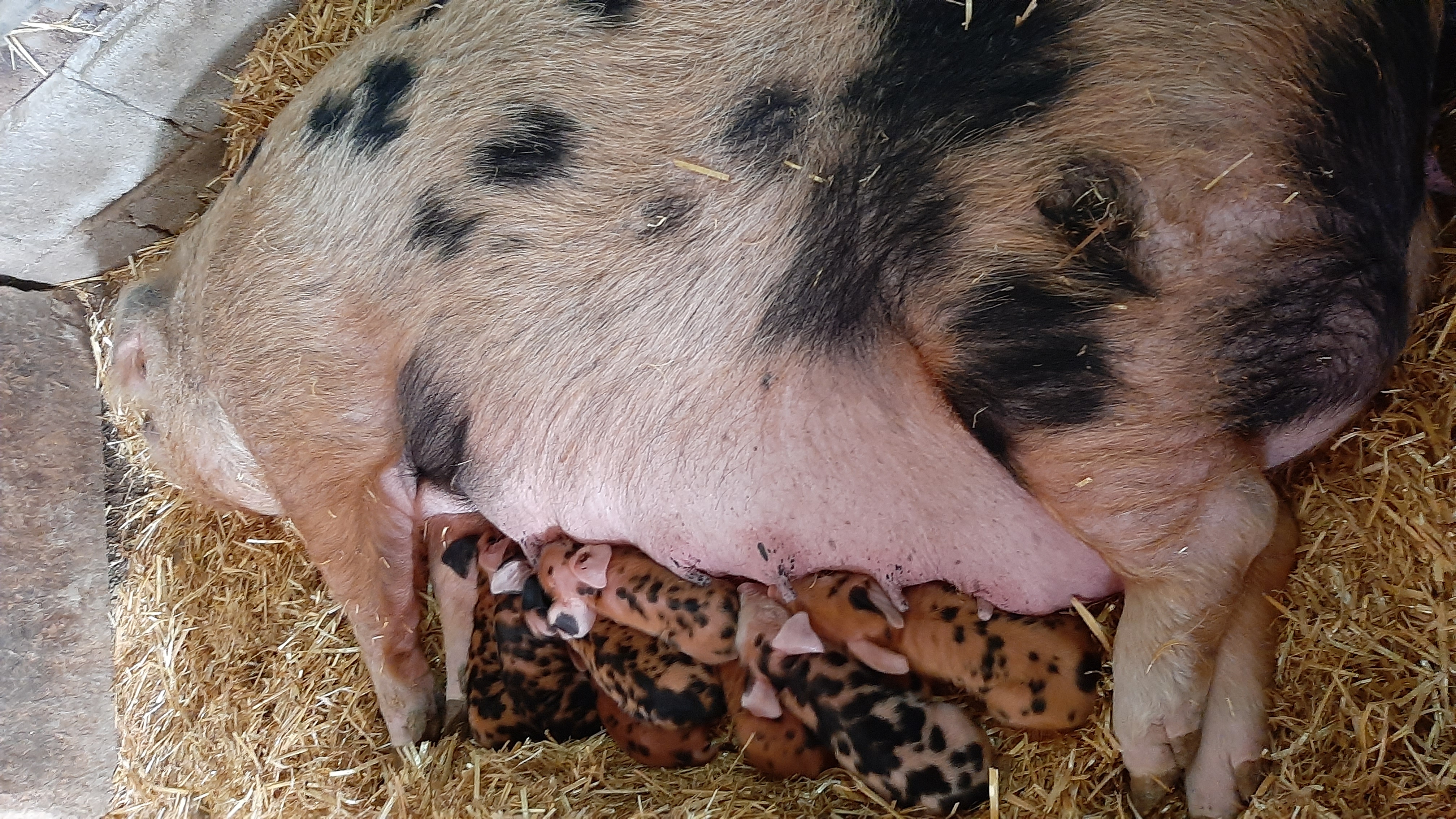 Pig Teat Placement
A gilt is born with a set number of teats (as are boars); selection for replacement gilts by teat numbers can be as early as five days after birth.
The heritability of teats on a sow comes from her parents. So, this is where the importance of a boar’s teats comes into play. He will have 14 teats, and his genetic tendency to have a certain number of teats is highly heritable.
If a gilt’s parents carry the genes for 8 teats each, it is likely she will be born with 8 teats and will struggle to feed a larger litter of pigs.
As we have seen on our charity, the average sow has 10 to 12 baby pigs (piglets). The average sow has 14 teats (of which it is our breed standard but is stipulated more is desired). Selecting for 14 teats in replacement gilts will gradually increase the average number of teats in future gilt litters whereby we have seen 16 teats coming to the fore.
Boar teat numbers are equally important; selecting for optimal teat numbers in boars will influence the herd’s genetic progress, this is why our breed conformation for boars is 14 teats, of course more is accepted.
There are several factors related to the ability of piglets to survive on a sow:
The goal of a piglet after birth is to emerge with great gusto, dry off and find its first meal of warm colostrum.
Selecting gilts to enter the reproductive herd that possess 14+ teats and breeding and then to boars with 14+ teats will increase the probability of the following:
Selecting for teat number is just as important as selecting for litter size. Both are highly heritable and genetic progress can be visualised in just a few generations.
Pig Teat placement
Teat positioning is important for piglet access. The teats should follow two parallel lines and be equally spaced, with no extra or odd-numbered teats or ones that have merged. When teats are poorly placed, such as being close to the hind leg area, they are less available to the piglet at birth.
Sows with large girths also exaggerate the teat placement. When a piglet is born the teat placement will stay with it for its life. IE poorly aligned, good parallel teats, blind nipple, inverted nipples.
Pig Teat Development 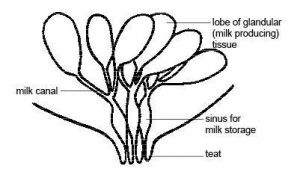 Ducts from the gland lead to a nipple or teat and there may be a sinus where the milk collects before being suckled – see below diagram.
The hormones oestrogen and progesterone stimulate the mammary glands to develop and prolactin promotes the secretion of the milk.
Oxytocin from the pituitary gland releases the milk when the piglet suckles.
The first milk is called colostrum. As we know, it is rich in nutrients and contains protective antibodies from the mother.
Milk contains fat, protein and milk sugar as well as vitamins and most minerals although it contains little iron.
Photos: UC Davies library and at source.
OSBPG Disease and Ailments – Erysipelas
Oxford Sandy Black Pig – The Characteristical and Evolutionary Observations of our Breed