Lizzie and I always knew that we wanted space to keep some chickens when we began house-hunting back in the late 1990s and so every house was viewed from this perspective. Could we afford a quarter of an acre garden? We’d be delighted with half an acre. So it was without surprise that when we first set eyes on our slightly tired house and were informed that, ‘The garden finishes where that far fence is,’ we put in an offer almost without going inside the house. That fence was a long way away and we’d found ourselves an affordable 3-bedroom home with 0.85 acres in rural Somerset.

So next came the pure breed chickens, just 6 or so at first. Then 6 became about 36 and we acquired some more land off our neighbours. What could go on here? It had to be productive and serve a purpose. The answer was Pilgrim Geese – our first foray into keeping and promoting a rare breed. We breed as many as we sensibly can, have sold many birds for breeding over the years (with birds and eggs going as far afield as Norwich, the Scottish Highlands and The Isle of White), they’re great lawnmowers and the surplus stock provide meat for the freezer.

The only problem with Pilgrim geese is that they’re not always great natural mothers and their eggs don’t hatch well in incubators. So we needed some Muscovy ducks. And because we weren’t busy enough (!) we started beekeeping too…

Then, 3 years ago, we had the opportunity to purchase some more land off our neighbours which made our garden a neat, complete strip going all the way down to the river. This extra 75m length gave us about 1.2 acres in all and opened up another discussion about what should be kept there.

We’d always liked the idea of keeping pigs and, after an initial bit of research revealed that it would indeed be possible to keep them in our modest grounds, we went on an excellent course run by Gillian Dixon of South Yeo Farm East, Devon, entitled ‘Introduction To Keeping Pigs.’ It was on this fateful course that we were introduced to the different breeds and scribbled a note down about someone called Kim Brook who kept dual purpose Oxford Sandy and Black Pigs and had a Facebook group. And the seed was sown.

On deciding that this was probably the breed we wanted to keep, we duly joined the Facebook group, discovered the Oxford Sandy and Black Website and noted that our nearest conveniently located breeder was Susan Tanner and her Windwhistle herd. On paying her a preliminary visit to check out the conditions that her pigs were reared in, we were instantly hooked on the breed and astounded at how professional Susan’s set up was and how much she clearly loved and cared for her pigs. This was definitely the breeder and the breed for us!

And so it was that after lots of excited preparations in the field at home, including putting in new access from the bridleway (there was no way we were going to be herding pigs 350m down the garden when they needed to leave the premises!), on 29th May 2016, our first 2 pigs, whom we called Ham and Pickle, arrived. We were smitten from the start and decided immediately that pigs, and OSB’s in particular, were always going to be part of our lives. 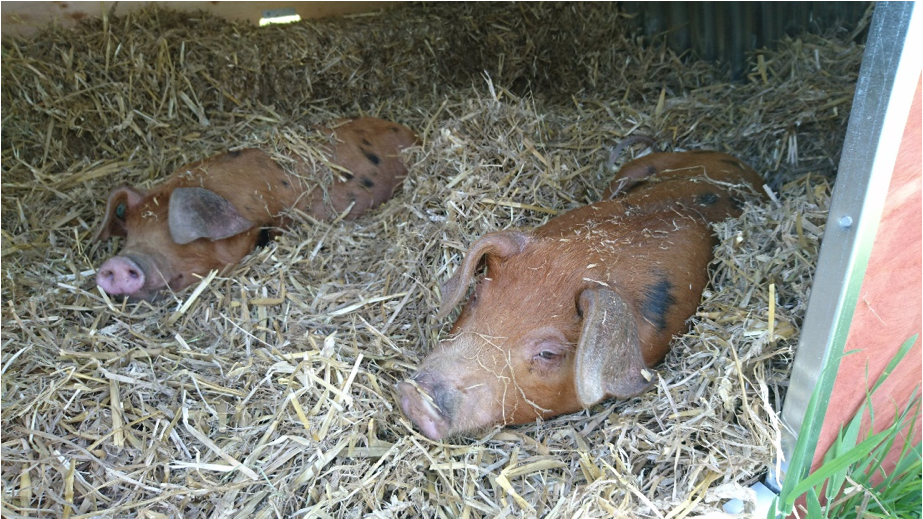 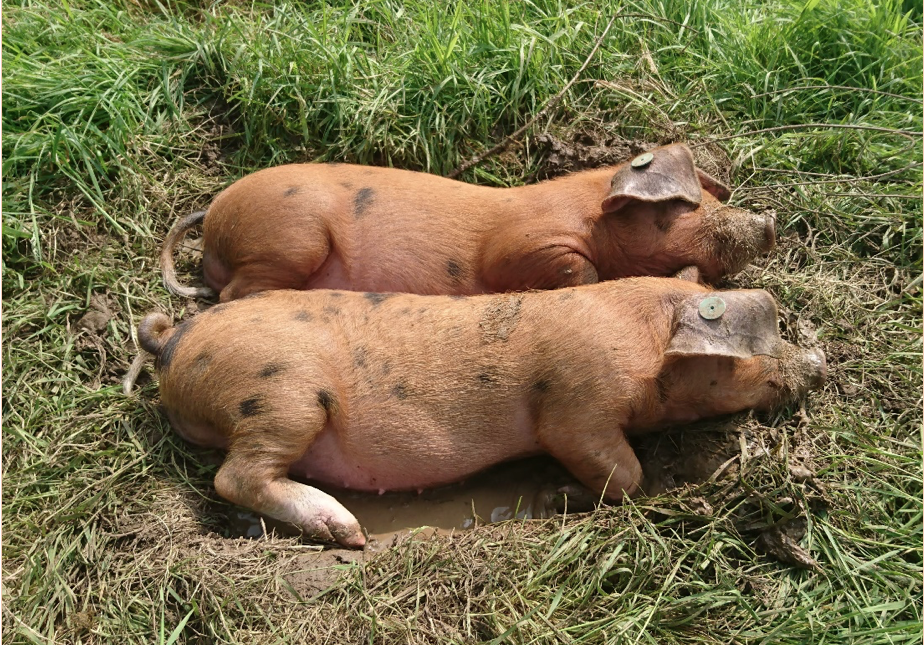 Exactly 5 months later we were the proud owners of a new freezer full of meat and were convinced (as I’m sure all pig-keepers are) that ours was the moist delicious pork in the world! So in 2017, with plenty of meat still in our freezer for the 2 of us, we decided to offer pre-orders of meat for sale in quarter pig boxes to close friends and family. We were amazed at the positive uptake and soon realized that all the quarters that people wanted made 3 pigs not 2! 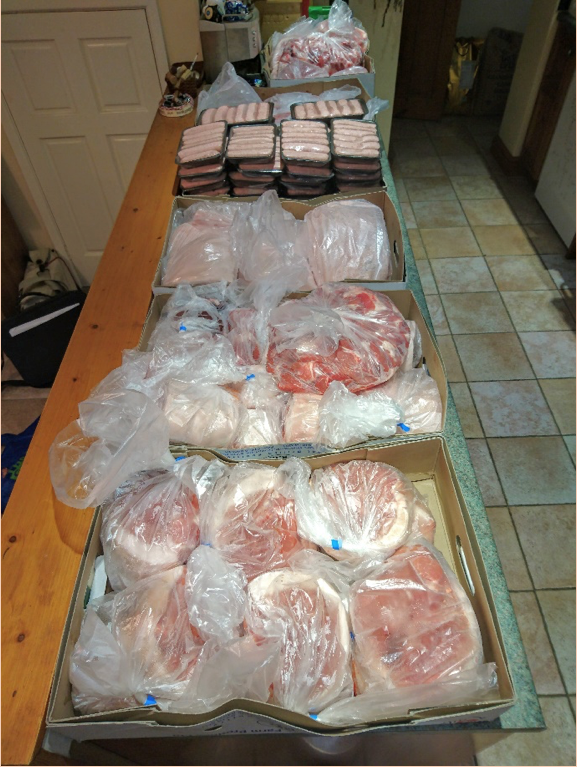 Susan Tanner duly provided us with 3 more, high quality, boar weaners and with a change in the feeding regime to the one promoted in the excellent Haynes Pig Manual’ by Liz Shankland, we reduced the fat levels and produced quality pork for our friends and family which we were really proud of and which our customers have given us nothing but rave reviews about. 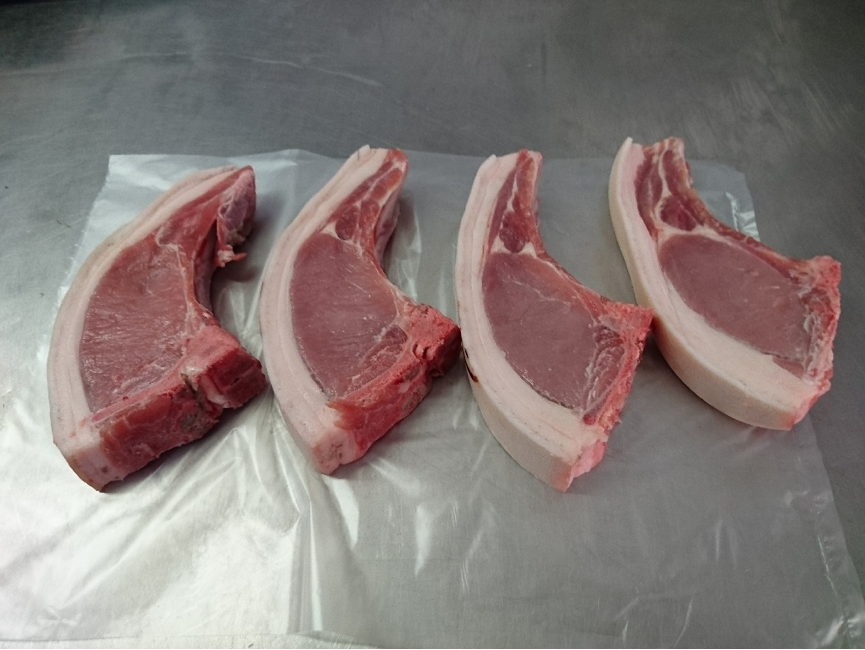 So here we are in 2018 and we’re enjoying every second of rearing our next 3 pigs in exactly the same way as last year’s in the hope of replicating the quality of the meat produced. With word of mouth pre-orders from a couple of people in the village and from Lizzie’s family, we’ve already got customers for most of the meat without even sending out so much as an email making the offer. A real testament to the quality of the pork produced from this fantastic breed of pig. Thank you Gillian, Kim and Susan and to all the wonderful people on Facebook in the Oxford Sandy and Black Pig Group for their support and advice along the way – we couldn’t have done it without you. 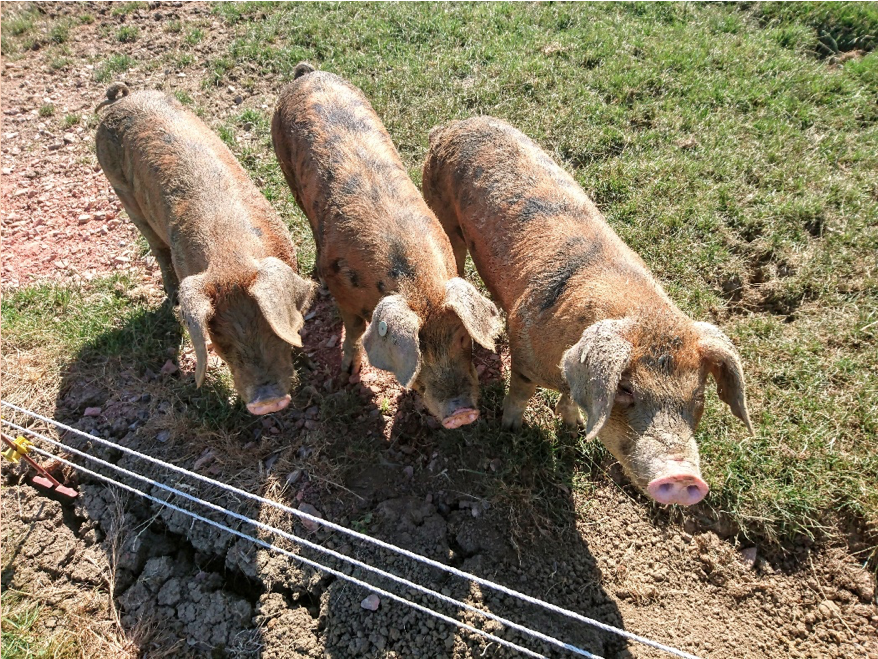