In this edition were hear from Sara and Robert Buttle and their journey to create there ideal farm, which features the wonderful Oxford Sandy and Black Pig

Robert and Sara’s plan to buy a farm and raise rare breed pigs can only be described as a mid-life crisis – most
of their friends thought they were mad to give up their jobs and comfortable life in suburbia. The plan had
evolved over several years, a combination of reasons but largely driven by a desire to raise pigs in a high
welfare environment. After looking for a small farm for some years, they are very hard to come by, their time
invested finally paid off and they were successful in buying at auction on July 24th, 2009, Lot 2 comprising ten
old farm buildings and 60 acres of land.

A lengthy period of negotiation with the planners followed and in summer 2010, a caravan arrived on site and
they moved in. One by one, each of the buildings was overhauled – fortunately, the Victorians built some
really good quality barns and the site was blessed with a number of brick buildings with slate roofs and mighty
beams plus one much older chalk-built barn with huge beams, a tiled roof and unusual vents (which is now the
Chalk Barn holiday cottage). All had been used for winter animal housing so required complete renovation
from top to bottom. 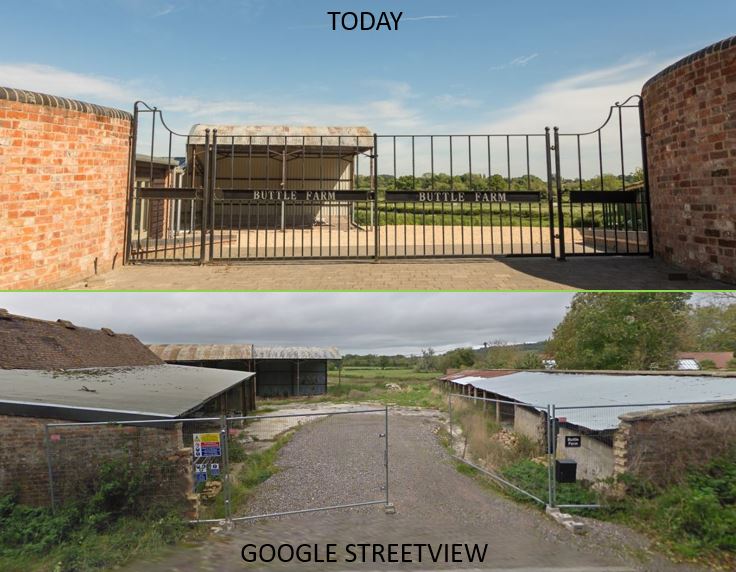 Soon after the caravan arrived, so did the first pigs– three Oxford Sandy &amp; Black registered weaner gilts
destined to become our first breeding stock. One of them, although no longer producing piglets, is still with us
today! Today, there are six different breeds of traditional pigs in the Buttle Farm herd – five native British rare
breeds (OSBs plus British Saddlebacks, Tamworths, Large Blacks and Berkshire) plus the hugely popular
Mangalitza. They are all raised on the farm in an extensive free-range system, living in small groups, outdoors
all year round in a high-welfare and natural environment. 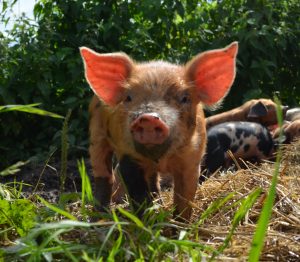 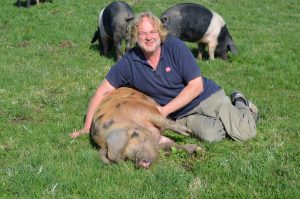 From these animals, as well as selling fresh pork, Robert makes a range of award-winning charcuterie including
bacon, salami and air-dried ham in the on-farm processing unit – a high-tech unit with temperature and
humidity control built inside the old grain barn. The pork and charcuterie are sold to quality local restaurants
all within a 25-mile radius of the farm and also direct to the consumer.
The only other livestock on the farm is the guinea fowl which roam free range around the barns into the
fields and earn their keep by devouring huge quantities of bugs along the way. They also pay their way by
producing eggs during the summer months which are mainly sold for hatching with any excess enthusiastically
eaten! 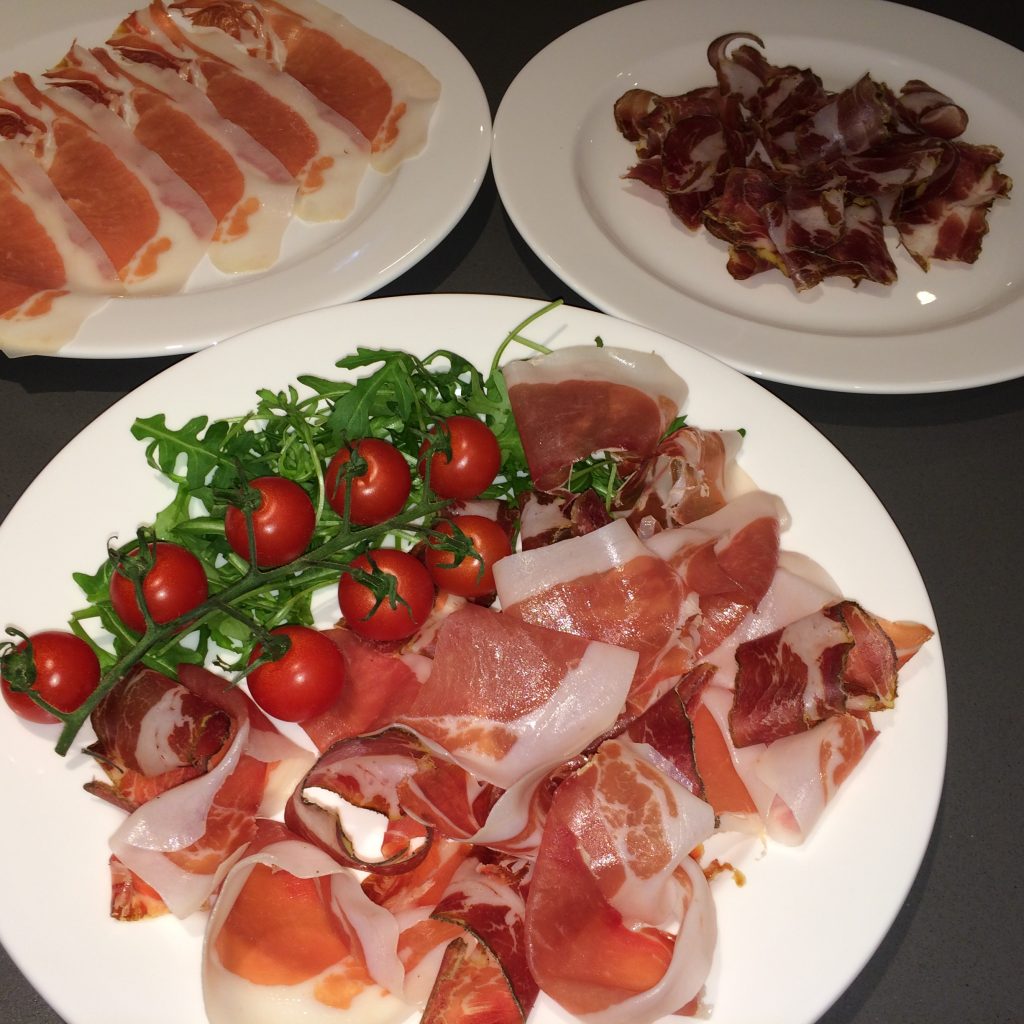 As with all small farms, diversification is important to the success of the business.
Two of the barns on the farm has been converted to holiday accommodation which has been rated 5* Gold
by Visit England – the ‘special’ feature is that all 4 bedrooms are equally lovely which makes the farm a very
attractive destination for groups of friends going away for a weekend together – no battles over who gets the
master suite and who gets the box room!

Robert also runs bespoke training courses in the processing unit ranging from general butchery and knife skills
to curing – learn what you want to learn rather than what the organisers want to teach you. These are hands-on
with a maximum of 2 students so that people get plenty of opportunities to learn by doing rather than
watching. Students vary enormously, ranging from 2*Michelin chefs to enthusiastic foodies. One rare breed
pig keeper was unhappy with the produce they were receiving back from their butcher – they felt that they
were missing out. By coming on the course, they discovered exactly what could be achieved to get the
maximum value from their pigs. 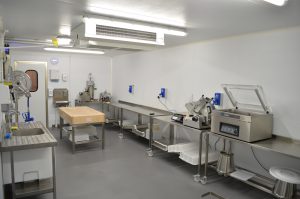 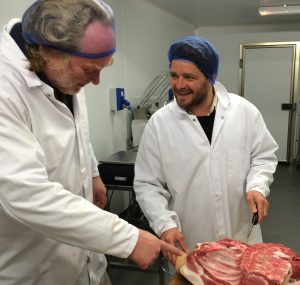 A wide variety of events run on the farm, mostly during the summer months. Every year, the Buttles team up
with the Slow Food organisation and run a Slow Pig day which is designed to bring people to the farm to find
out more about the importance of our rare breeds and to realise that they should ask more questions about
where their food comes from. (NB: the 2018 event is on June 3 rd )

Last year, the Farm was the venue for a wedding – the weather was kind and the day was a great success. The
terrace area where the ceremony took place has a spit roast, a large wood-fired oven and a BBQ and can
accommodate quite a crowd. As well as the wedding, it has seen gatherings ranging from Rotary Club summer
BBQs to WI evening meetings. 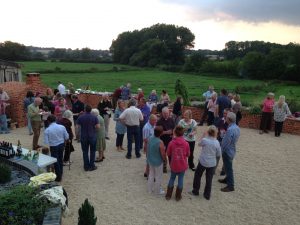 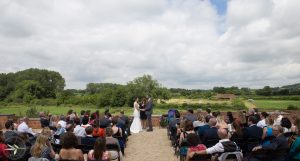 There have also been some interesting film, tv and radio crews visit over the recent years. CBC (the Canadian
version of the BBC) wanted to film some pigs working a maze – yes, really! Ten days were spent training some
15-week- old weaners to negotiate the maze. Thankfully, when the camera crew arrived, they behaved
faultlessly! 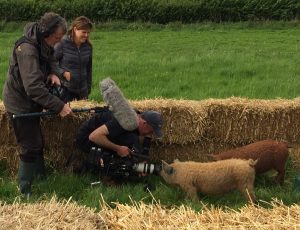 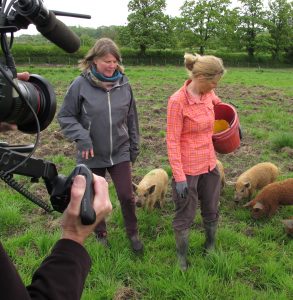 On the radio, Robert has appeared several times on local radio including one very popular session describing how
to cook the perfect crackling, and well as more recently on the BBC R4 Food Programme, to explain the value
of and importance of rare breed pork.

Then there was the camera crew who wanted to film a ‘Day in the Life of …’ documentary in the holiday
cottage focussing on a young couple who are top class cyclo-cross athletes.
And sadly, one that ended up on the cutting room floor, for C4, hosted by Michel Roux Jnr, comparing cheap
produce with premium versions – in our case, it was Bacon.

A Pig Tale.. from the Scottish Highlands
Meet Hannah Coad, Taking Her First Steps with the OSB