Most of us have experienced this in our sows and it also affects the gilts. There are a few causes to mastitis such as teat injuries from floors or piglets, bacterial infection, poor hygiene and the symptoms is that the udder is hot, hard and swollen, lumps and sometimes the sow/gilt may become unwell and the piglets may also suffer due to lack of feeding.
Causes
Mastitis in sows is caused by ascending infection of the teats by bacteria. The organism most commonly involved is Escherichia coli or related organisms (coliforms). Bacteria such as Arcanobacterium pyogenes, streptococci and staphylococci may cause infections of single glands. Acute and severe mastitis caused by Klebsiella spp. may occur in outbreaks of fatal disease following trauma to the teats caused by rough sawdust bedding. Traumatic injury resulting from piglet teeth, sawdust bedding, or poor quality flooring add to infection. One or both glands supplying a single teat may be infected. Infection enters via the teat canal following teat contamination and bacteria multiply in the gland. Introduction of endotoxin into the mammary gland will cause mastitis and agalactia and endotoxin can be detected in the blood in mastitis.
Clinical signs
Acutely affected sows are usually depressed, loss or lack of appetite and fevered (temperatures of 40.5-42°C, 105-107°F are not uncommon). The udder is usually swollen and oedematous (abnormal swelling of fluid), often with massive congestion. Any secretion that may be obtained after oxytocin injection contains pus. Pain in the udder may lead to restlessness in the sow when piglets attempt to suck. The litter rapidly loses condition. Acute mastitis usually occurs within 1-3 days of parturition. The body temperature falls below normal, the animal can no longer rise and respiratory distress develops frequently leading to death. Coliform (a bacteria calledaerobic bacillus that lives in the colon) mastitis appears to regress within 3-4 days although in severe cases lactation may cease entirely. Sub-acute infection or infection in one or more glands occurs much more commonly and may be recognised by the increased hardness of the gland and, in its early stages, by a square area of reddening or the skin over the affected gland. The litter loses condition. Mastitis in a single gland is often noted only when an affected gland fails to return to normal after weaning. There is often teat injury, especially in the pairs of teats. 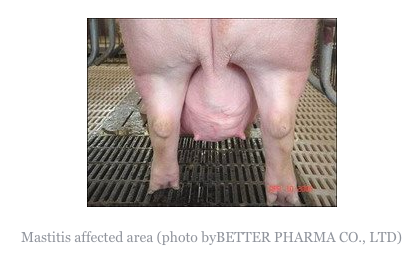 Acute mastitis is easily recognisable as affected sows are off their feed and have obvious swelling of the udder, sometimes with reddening and oedema. The litter is usually in poor condition. Animals are often lying down alot, but must be made to rise in order to confirm that mastitis is present. The udder should be felt on both sides by running the hand under both lines of glands.
Individual affected glands feel firm and hot. Laboratory examination of expressed secretion confirms that presence of mastitis by means of cell counts and the organism(s) responsible can be identified. Action requires oxytocin injection as milk let down is under voluntary control. Sub-clinical mastitis may only be detected after cell counts on expressed milk, showing 75% white blood cells. Chronic mastitis is easily felt upon inspection during lactation and easily seen in dry sows.
Treatment and prevention
Acutely ill sows may be saved by injection with neomycin, tetracyclines, ampicillin, amoxicillin, streptomycin, fluoroquinolone, ceftiofur or trimethoprim: sulphonamide for 2-4 days. Oxytocin should also be given. The litter should be fostered or reared artificially. After recovery it may be necessary to cull the sow as she will be prone to this ailment on all farrowings.
Other supportive treatment may include anti-inflammatory medication. In sub-acute cases, rehydration is not necessary. Antimicrobial injection may improve the condition where single glands are affected, but results are poor where abscess are present and has occurred or teat ends are damaged.
Control depends upon hygiene, use of soft bedding other than sawdust, early treatment and, possibly, the use of commercial E. coli vaccine if the condition is due to E. coli. Where the condition is recurring and pre-farrowing infection is suspected, treatment with trimethoprim sulphonamide at 15 mg/kg given in the feed from day 112 of gestation to day 1 post-partum may eliminate early lesions and prevent the development of clinical disease. Sows which have had severe or repeated bouts of mastitis should, unfortunately, be culled and affected sows should only be retained if they have sufficient functioning teats.